In this week's Intersect, read about:

“At least tens of thousands of pro-lifers braved the cold to march to the U.S. Capitol building for the 50th annual March for Life, for the first time celebrating the fall of Roe v. Wade instead of having to again demand it be overturned. As the first national March to occur since the U.S. Supreme Court overturned Roe in 2022’s Dobbs v. Jackson Women’s Health Organization, the theme this year is ‘Next Steps: Marching into a Post-Roe America.’ As such the path concluded not at the Supreme Court building but at the Capitol, where legislative battles will continue over taxpayer funding of Planned Parenthood, Democrat efforts to codify a ‘right’ to abortion, federal protections for the preborn, and more.” read more at LifeSiteNews

Heavenly Father, we praise You for the victories You have brought about in this battle for life. We know it is not Your intention for governments to sanction the murder of your image-bearers. Give us wisdom as we advance the sanctity of life through laws and give us love and grace as we minister to mothers in need. In Jesus’ name, amen.

My Faith Votes is thrilled to partner with Texas Rally for Life for the annual rally taking place this Saturday, January 28, outside the Capitol in Austin. Our CEO, Jason Yates, will be there, along with some of our Action Partner volunteers and we’d love for you to join us! Be sure to look for the My Faith Votes table and signs. If you need a ride to Austin, Texas Rally for Life has information about busing and carpool options right here.

“A prominent NHL player ignited a debate within the sports and religious worlds when he cited his Christian faith in refusing to participate in his team's LGBT Pride celebration. Ivan Provorov, a Philadelphia Flyers defenseman who is tied for the team lead in games played, declined to participate in pre-game warmups in which his teammates wore Pride-themed rainbow jerseys and carried hockey sticks wrapped in rainbow tape. ‘I respect everybody, and I respect everybody's choices. My choice is to stay true to myself and my religion,’ said Provorov, who was born in Russia and identifies as Russian Orthodox.” read more at Christian Headlines

Lord, You remind us throughout scripture that we will be hated because of You. I thank You for those, like Ivan Provorov, who have demonstrated courage by standing for You, despite the cost. I ask for courage and strength to boldly live out my faith and trust in You in an increasingly hostile culture. As 1 Corinthians 1:18 says, “For the word of the cross is folly to those who are perishing, but to us who are being saved it is the power of God.”

The world wants us to pledge our allegiance to the identities it deems acceptable and good. If we don’t, religious freedom will continue to be seen as subversive of the common good and be increasingly restricted. It’s important that we, as Christians, make a personal pledge to honor God in every area of our life, no matter the cost. Will you make that pledge with me today? Use 1 Peter 3:13-17 as a basis.

“The FBI found more classified documents at the Wilmington, Delaware, home of President Joe Biden during a consensual search Friday that lasted nearly 13 hours, his personal lawyer and a prosecutor said Saturday evening. The discovery was the fourth time since November that classified records or material has been found at a private address of Biden’s. His personal lawyer Bob Bauer, in a statement, said the Department of Justice seized ‘six items consisting of documents with classification markings and surrounding material.’” read more at CNBC

As Micah 6:8 says, “He has told you, O man, what is good; and what does the Lord require of you but to do justice, and to love kindness, and to walk humbly with your God?” Lord, I pray for these words to be true in my life as well as in the lives of those who serve me in government.

Standards for justice were established by the author and definer of the entire universe - God. Do we understand how the justice system works in our own government? We created this helpful guide for you to have a better understanding of the American Justice Systems as well as how you can be praying. Feel free to download and share.

“The Centers for Disease Control and Prevention (CDC) has released material urging teachers and administrators to embrace LGBTQ causes. While the CDC describes the motivation as helping schools become more inclusive, critics say the agency is overstepping its field to push a political agenda.” read more at CBN New

Lord Jesus, I know that in any role in which You have placed me, I have the joy of serving You. Help me to “work heartily, as for the Lord and not for men, knowing that from the Lord [I] will receive the inheritance as [my] reward.” (Colossians 3:23-24) Give me wisdom and knowledge, and courage to do and say what is right and always honoring You

Parents: Please contact your local school board members to inquire if your district has utilized this “CDC Assessment Tool”. You can also send a letter to your child’s teacher notifying them of your concerns and requesting pre-notification and prior approval before any subjects or materials are used/discussed in the classroom that relate to LGBTQ issues or persons. Feel free to utilize this sample letter (MS Word / Google Docs). 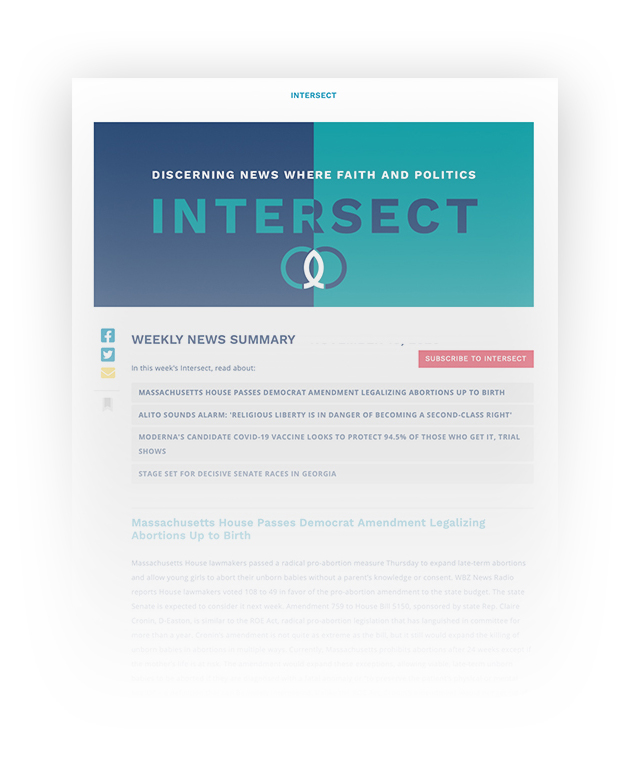 Get The Intersect Delivered Directly To Your Inbox

The Intersect features the latest news at the intersection of faith and politics. Be in the know, subscribe now.